Judgment under Uncertainty: Heuristics and Biases helps analysts to take into account biases in judgements especially when evaluating uncertainty.

The Admiralty Scale (also called the NATO System) is used to rank the reliability of a source and the credibility of an information.

The Admiralty Code is a relatively simple scheme for categorising evidence according to its credibility. It was initially used by the British Admiralty for the assessment of evidence used in naval intelligence, but it is now used in many police departments, intelligence agencies and defense-related organisations, including the US Army (US Army Field Manual 2-22.3, 2006) ref: The Admiralty Code: A Cognitive Tool for Self-Directed Learning

In JP 2-0, Joint Intelligence (page 114 - Appendix A) includes an appendix to express confidence in analytic judgments. This has been included in a MISP taxonomy called ‘estimative-language’ where these analytic judgments can be used in threat intelligence platform to directly express the confidence level on the information tagged. 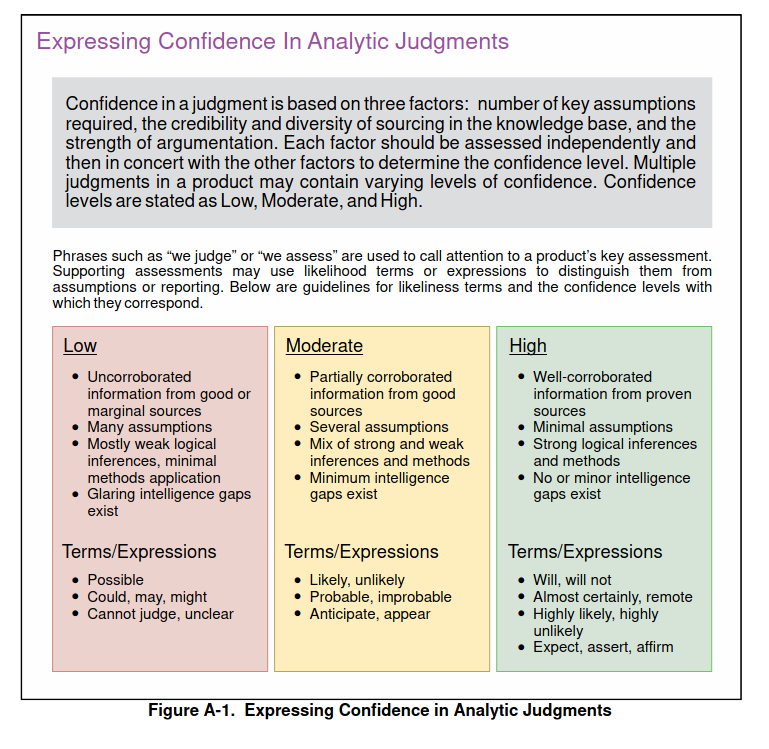 Model of Intrusion and Attack Analysis

Cyber Threat Framework by Office of the Director of National Intelligence

The Diamond Model of Intrusion Analysis presents a novel model of intrusion analysis built by analysts, derived from years of experience, asking the simple question, “What is the underlying method to our work?” The model establishes the basic atomic element of any intrusion activity, the event, composed of four core features: adversary, infrastructure, capability, and victim. A MISP taxonomy called ‘diamond-model’ proposes an applied model to tag information in threat intelligence platform.

MITRE’s Adversarial Tactics, Techniques, and Common Knowledge (ATT&CK™) is a curated knowledge base and model for cyber adversary behavior, reflecting the various phases of an adversary’s lifecycle and the platforms they are known to target. ATT&CK is useful for understanding security risk against known adversary behavior, for planning security improvements, and verifying defenses work as expected. ref Adversarial Tactics, Techniques & Common Knowledge

MISP implements the complete set of ATT&CK as galaxy.